So you’re reading a blog post about grammar rules and you’re told to avoid contractions — even if it feels like you can’t — and not to (needlessly) use any split infinitives. Then you read on and you are told by the author not to write in the passive voice, or to begin sentences with coordinating conjunctions like “and.” And as for incomplete sentences…?

As we can see, grammar rules are suggestions, not the laws of physics. You can break ‘em, and you often must do so when going for a conversational tone in your brand’s copywriting.

What is a conversational tone in marketing?

A conversational tone makes the reader feel like the writer is talking directly to them — as if they’re having an actual conversation. This brief email marketing message from B2C furniture seller Ashley Homestore is nicely conversational, with a “let’s,” some instances of “you”, ellipses and an “informal” graphic design to match.

By coming off as casual and effortless, such conversational content in marketing can shrink the gap between a brand and its target audience, in a way stiffer, more rule-adherent business writing can’t.

The reader is not kept at arm’s length with too much jargon or lots of complex, long sentences. Instead, they’re made to feel like they’re deeply connected to and involved with what’s being discussed (this is where the inclusive “Let’s…” is so useful).

The word choice and writing style aligns with their backgrounds, values and aspirations, not to mention the product being marketed. Selling chat software B2B or scented candles B2C? Either way, a conversational tone with short paragraphs can fit more naturally than a formal writing style.

I mean, imagine the blog post about deodorants below from Beardbrand, a B2C hair and skin brand, if it were in a more formal voice, instead of this expertly conversational tone: 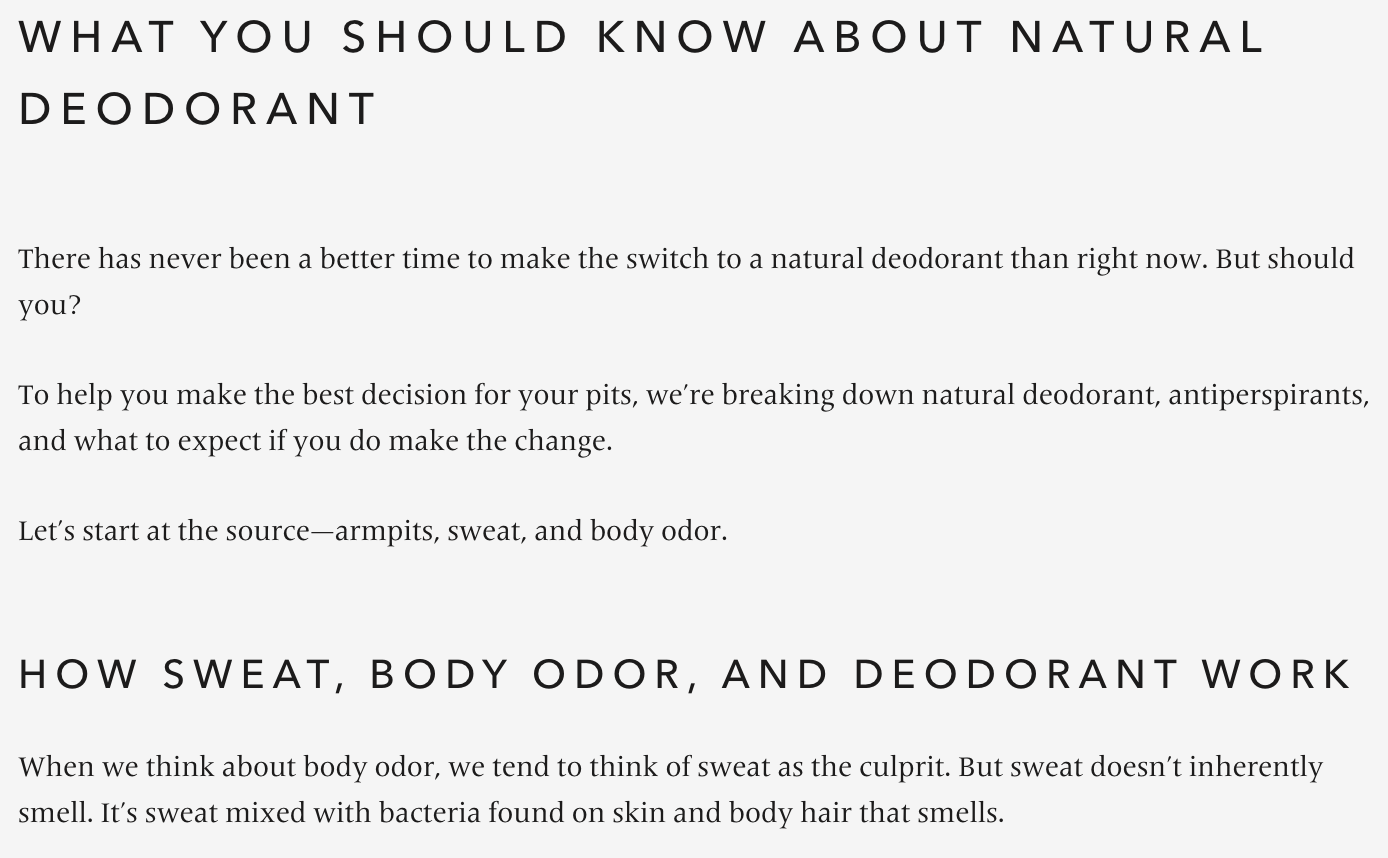 In contrast, what if they’d gone all formal white paper-ese with their word choice and sentence structure? Definitely an odd fit for talking about deodorant in particular:

“Never in human history has there been a more optimal moment to transition toward a deodorant free from artificial additives. However, making the right decisions requires knowing all the facts. For informed decision-making, stakeholders must be cognizant of the relative merits of natural deodorants and antiperspirants. Our initial discussions will focus on the primary catalysts of odor.”

This hypothetical text feels detached from both the target audience and the specific product being sold, not to mention disconnected from the assertive, voice-y Beardbrand ethos of “We’re not looking for quick cosmetic fixes to solve issues” (note the contraction and the “we” there). But the conversational writing style from the actual company site? It shines through. The result is a distinctive and consistent brand voice.

What are the elements of conversational style?

A conversational tone can be useful in every forum from content marketing and social media strategy to employee recruiting and product how-to guides. So how do you write in one?

While there are multiple ways to do a conversation writing style — we’ll go through them in the next section — some common components as exhibited by the Beardbrand example include:

One more thing, as Steve Jobs would say — conversational tone doesn’t necessarily mean “exactly like a casual conversation.” If you’ve looked at transcripts of keynotes or podcasts, you’ll see a lot of broken-off thoughts and incoherent statements. You don’t want that in your conversation writing style.

Why — and how — brands use conversational tone

Earlier we talked about how a conversational tone can naturally “fit” certain product categories (like chat software, for literally having a conversation), as well as brand identities (Beardbrand connects with its target audience through down-to-earth language).

But most of all, conversational tone is a way of showing a target audience that you understand them and value their time and support. Conversational style, done well, should help win over new audiences while retaining existing ones. It should also support your overall brand image.

To see how, let’s say you were looking to improve your website and came across the home page of Automattic, the makers of WordPress.com and a company that sort of straddles the B2B/B2C line (individual bloggers as well as company sites):

Right away, the conversational tone announces itself with “We are…” and then does different spins on it in each of the subheads. We get exclamation marks (“free!”), second person (“Connect you to your people”), and incomplete sentences (“Always on the job.”).

It all adds up to a relaxed feel that makes Automattic and its products seem welcoming. And the same thread runs through the company’s prominent job board (“Work With Us”).

A typical in-office gig is not really your style — you’re more of a work-from-home person.

Opening emails and chats from your personal laptop, in the comfort of your own home … that’s perfect!

Your search for a particular type of flexibility is reflected in how Automattic presents its workplace. This “How We Work” segment uses contractions, second person, short sentences and a fitting cultural reference (“Choose your own adventure”). It also doubles as a nice mini brand identity statement, showcasing Automattic’s commitment to employee autonomy, usage of its own tools (its site is built atop the same software it produces) and quality. 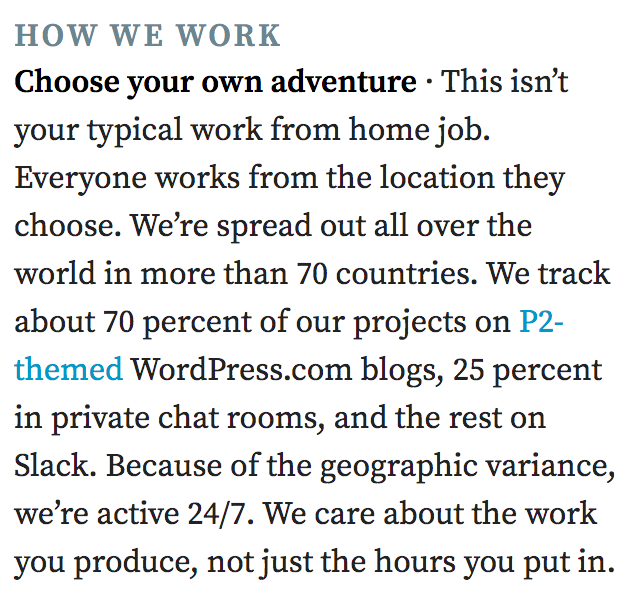 As conversational tone goes, our three main examples so far — Automattic, Beardbrand and Ashley Homestore — are all at the far end of the conversational writing spectrum.

That sort of makes sense, since B2C brands can usually get away with a more casual voice than their B2B counterparts. B2C audiences have more choices and are less attuned to industry jargon than B2B shoppers, making a conversational tone a potentially powerful differentiator.

But it’s possible to still strike a conversational tone even with more technical subject matter prone to all that jargon. Slack is the biggest name in team collaboration, serving B2B customers. This blog on remote work shows how a conversational style can be affected even within the constraints that come with talking about inherently complex subjects like software and multi-channel communications: 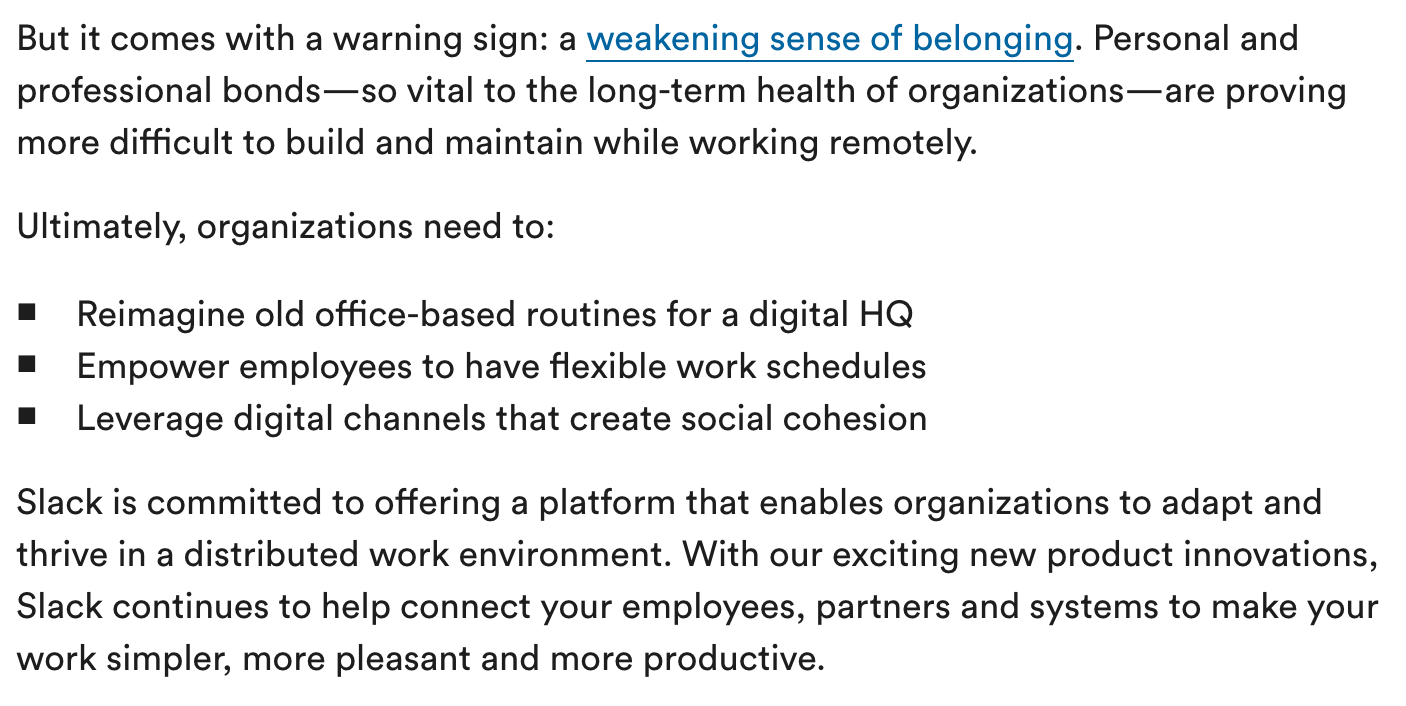 We get the “But …” coordinating conjunction starter, some formatting that breaks up the text and makes it feel like it mimics speech — the em-dashes for a pause, the bullets for reading off a list — and a shift toward second person at the end (“your employees”) to bring it all home. These elements of writing style are noticeable despite some jargon-adjacent language (“Leverage digital channels”).

AT&T Business even managed to integrate a casual brand voice into the intro of a white paper on the incredibly complicated topic of how 5G relates to NFV and SDN (the jargon just comes naturally in this product/service space). Note the “we” and “our” — inclusive in this case, unlike many brand voices that use the exclusive “we” to talk about only their internal teams — plus the DNA metaphors. 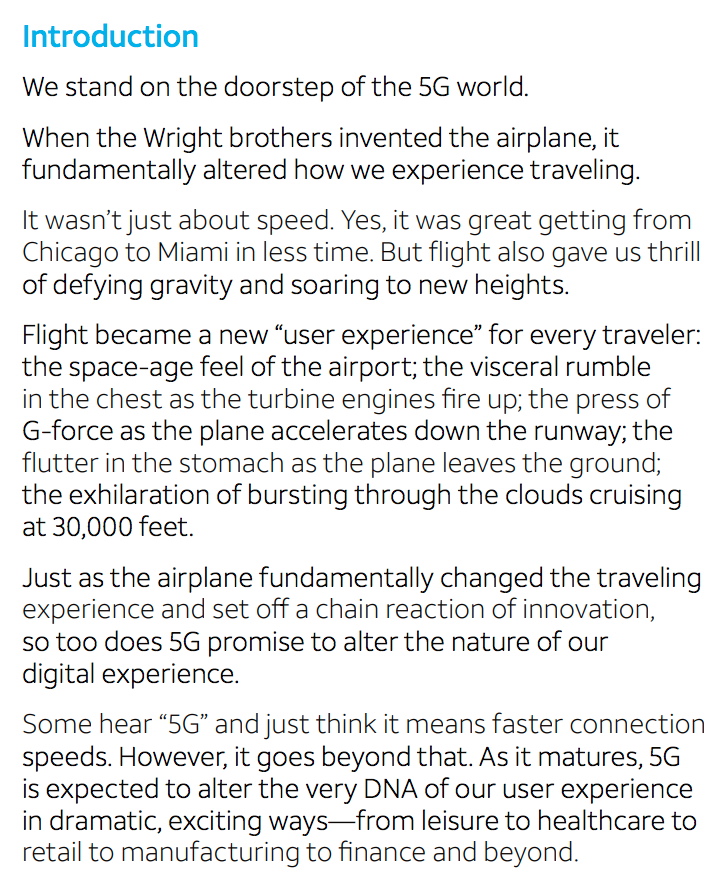 Where a conversational tone does and doesn’t work

Conversational writing fits especially well into B2C content marketing. But as we’ve seen, it can also thrive even in the densest of B2B assets. The question then is when to deploy it. Mostly, it comes down to audience. Let’s run through two examples: One in which it makes sense to be conversational and another in which it doesn’t.

Seemingly overnight, Zoom became a staple of both individual and workplace communications, as people shifted from in-person to virtual meetings in the wake of the COVID-19 crisis. While the company has long maintained important technological advantages over its competitors, its casual-yet-technical brand voice has been an important part of its rise, too.

On Instagram, Zoom uses a consistently conversational tone that’s well-suited to speaking to a large public audience. The writing style across its post captions and graphics makes Zoom’s solution seem approachable and fun.

Second-person voice and expressive punctuation like em-dashes and exclamation marks abound, along with very short sentences like “#NoFilter? No, thanks!” It’s a perfect combination of message and medium — Instagram is a comfortable home for such direct, free-flowing language. At the same time, Zoom is describing important technical functionality of its platform (“video filters”), showing that conversational tone does not have to mean sacrificing detail.

Silver Peak, which sells software-defined wide area network (SD-WAN) solutions, has a high-ranking, in-depth explanation of this complicated concept. Describing exactly what an SD-WAN is, why it’s different and what sets one vendor’s solution apart from others is not easy — and likely even harder if sticking to the simple words and voice of everyday conversation, which won’t match what a buyer is seeing on a spec sheet.

Instead, Silver Peak has successfully deployed a formal tone with careful word choice, all to reach its experienced audience of B2B buyers. Its target audience is likely looking for fine-grained detail and to be educated on the particulars of Silver Peak’s offering, meaning that complex words, long sentences and third-person voice are in, while second person and exclamation points are out.

The famous “Elements of Style” from William Strunk and E.B. White advises writers “not to affect a breezy manner,” i.e. don’t be too casual and free-flowing. Like so many other grammar “rules” from that book, though, it should be broken — a conversational tone, done right, can be liberating for writer and reader alike. And along the way, your brand voice can become more relatable and exciting to read, improving your overall content marketing efforts.