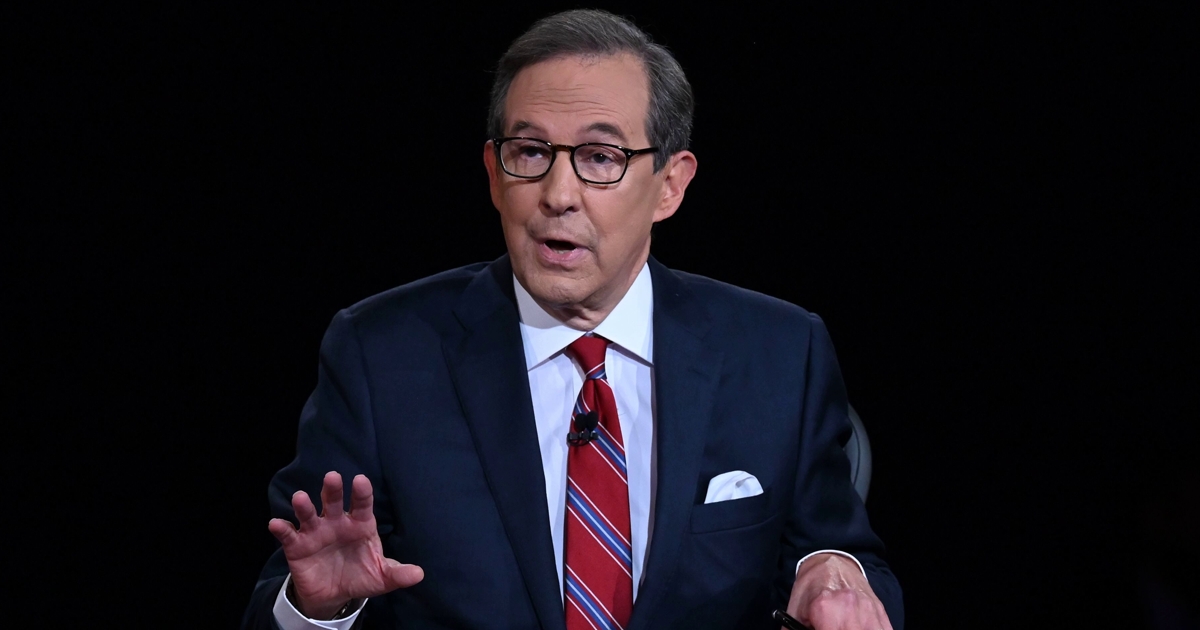 One of the many slings and arrows being hurled at debate moderator Chris Wallace is the charge that he “placated” Trump by repeatedly assuring him he’d be “happy” with an upcoming question, but how many times did he really do that?

The Fox News host has taken blistering criticism from nearly every quarter over his handling of Tuesday night’s contentious presidential debate at Case Western Reserve University in Cleveland, Ohio. But one “sin” that’s been largely overlooked by the cable news takes did get noticed on Twitter. A lot.

NBC News correspondent and MSNBC anchor Katy Tur was one of the more prominent users to notice the trend during the debate, writing “I don’t understand the need to tell the President he’s going to be very happy about the next question.”

I don’t understand the need to tell the President he’s going to be very happy about the next question.

Others observed the phenomenon less generously even than that, although nearly many saw it as a reflection on Trump as on Wallace.

Chris Wallace should stop telling Trump he is going to be very happy with his questions.

I hate that the only way Chris Wallace can get Trump to stop talking is to say “Mr. President, you are going to be very happy.” It’s truly like talking to a 4-year-old. #Debates2020

It was really nauseating to watch Chris Wallace lamely trying to placate Trump enough that he’d shut up for two seconds, telling him “You’ll like the next question” like he’s a fucking toddler.

Wallace coddling Trump — “Mr. President, you’re going to be happy with this next segment…” — is just a complete and total embarrassment #Debates2020

how many times has chris wallace said to trump that he’d “be so happy with the next question” tho?

i’ve… never heard that before in a debate. #debates

Never seen a debate where the moderator has to say to a president, “ hold on mr. President you’re going really like this question “ as a way to regain control.

This is the second or third time that Wallace has tried to placate Trump by saying “Mr. President, you’re going to be very happy“ by the topic they’re moving onto. This isn’t debate moderation, it’s daycare for a giant man-baby who needs his nap. #Debates2020

So, how many times did Wallace reassure Trump he was going to be “happy” with an upcoming subject change? Drumroll please: He did it twice.

The first time, in an attempt to head off Trump’s then-umpteenth steamrolling, Wallace broke in to say “Sir, you’ll be happy. I’m about to pick up on one of your points to ask the Vice President, which is, he points out that you would like to add a public option to Obamacare. And the argument that he makes and other Republicans make is that that is going to end private insurance.”

That’s a factually false assertion, notwithstanding the embarrassingness or lack thereof of the “groveling,” as some Wallace critics put it.

The second was to interrupt another Trump bulldozing to tell him “Mr. President, you’re going to be very happy because we’re now going to talk about law and order.”

Again, embarrassingness notwithstanding, Wallace actually offered a decent factual refutation of Trump’s crime talking points. But he also validated Trump’s premise that somehow, Joe Biden would not be “happy” to talk about “law and order.”

The embarrassment is, unfortunately, something that can’t be ignored, and as much as it illustrated Trump’s temperament, it also revealed Wallace’s unsuitability to the moment.

Mediaite’s Colby Hall wrote a compelling defense of Wallace in which he argued that Wallace deserves some grace because no moderator could have controlled Trump, and most would have done worse. Hall convinced me of that — the narrow point that Trump’s verbal diarrhea is an unstanchable force of nature for a mere mortal. And in fairness to Wallace, he did tell Trump right to his face that he was by far the worst offender when Trump tried to “both sides” the issue.

That’s not to say that Wallace could not have met the moment more courageously or creatively, and it doesn’t excuse the truckling “you’ll be happy” pacifications, but as far as the interruptions went, Wallace turned in a performance that was undoubtedly superior to what another moderator might have done. He failed better than others would have failed.

And even though Wallace let Trump spew blatant and obvious lies, the white flag was waved on that count well in advance of the debate. A generous, overly-fair person could forgive the lapse on the basis of sheer volume and the rationale that Trump’s opponent would have the opportunity to refute the lies.

But Wallace failed the facts even by those generous standards, first by failing to ensure Biden had the opportunity to offer the refutations that Wallace neglected.

And even if you grant that this sin of omission was beyond Wallace’s control for lack of a Hannibal Lecter rig to bind Trump between questions, Wallace failed the facts with sins of commission. In one exchange, he didn’t just allow Trump to lie or restate a Trump lie as the framing of criticism, he outright validated it.

Now, I know Trump has held a lot of indoor rallies since the pandemic exploded, because I have read about them on Mediaite dot com. They’ve even talked about them on Fox News. And this isn’t the first time Wallace has actively cosigned one of Trump’s lies on the air.

For good measure, Wallace even laughed when Trump made a wisecrack about Biden’s refusal to hold super-spreader rallies, likely a nervous reaction but still embarrassing. If the situation were reversed, if, say, Chris Cuomo had laughed out loud when Biden called Trump a “clown,” I doubt that would have gone unremarked upon.

The Commission on Presidential Debates is trying to find some way to fix this for the next debate, and God help them. But the next moderator should at least resist the urge to openly truckle to Trump’s infantile temperament, and not sign off on an egregious and harmful lie.