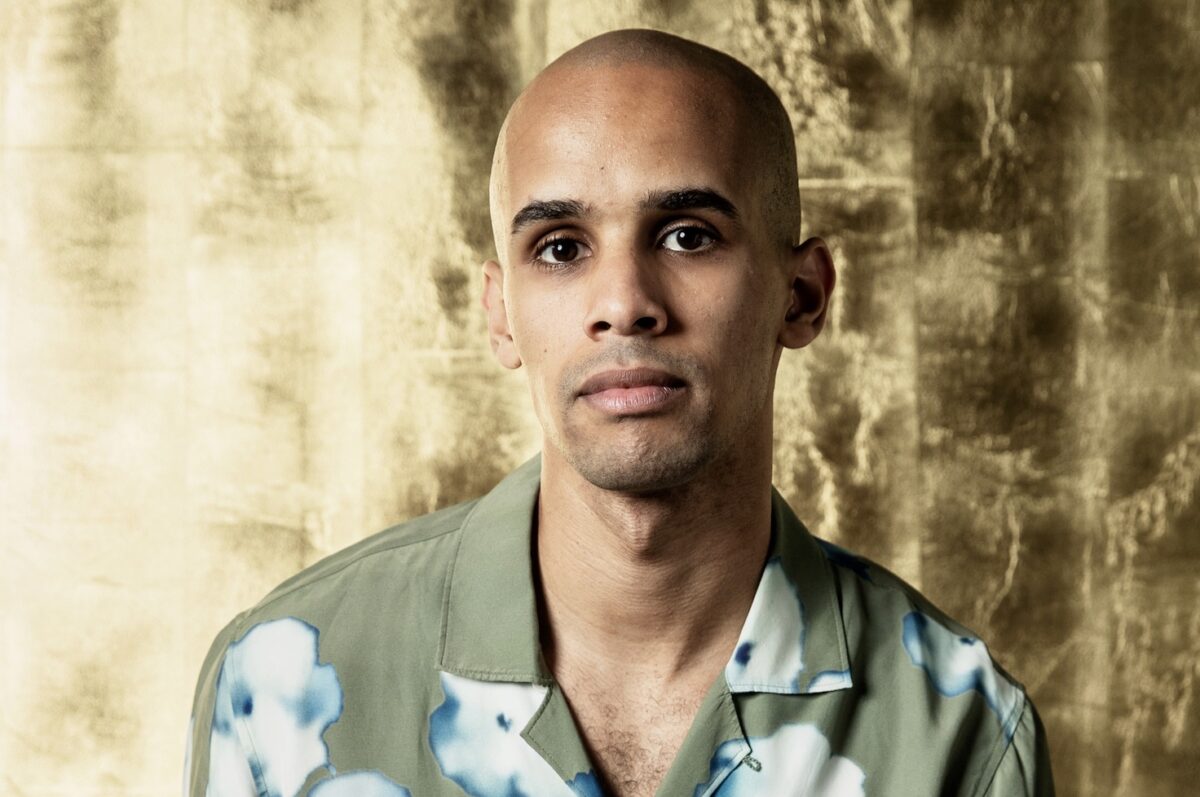 Cole Brown is the 25-year-old author of Greyboy: Finding Blackness in a White World — an essay collection that examines the intersection of race and class, as he grew up Black in a world with white privilege.

Brown reflects on moments of prejudice and injustice in Greyboy, both the overt and more subtle liberal racism. He illustrates the confusion and hardships that come with living in the in-between while commenting on his own privileges growing up “in the microscopic bubble of affluence that was Chestnut Hill.”

Brown describes his text as a “scrapbook” of the “collected stories of tokens and the world of white wealth we operate in,” hoping that he can shed light on some of the many realities Black Americans face.

The debut book, which released on September 15, has drawn acclaim from prominent figures.

Sean “Diddy” Combs praised Brown for his honesty and ability to shine “a light on the unique challenges that come with us achieving success.” Queen Latifah echoed Combs,’ noting that “If you have ever struggled with the anxiety of being the only or the isolation of living between two spaces, this book is a must read!”

I spoke to Brown — whom I studied with at Georgetown University — to discuss the events that inspired his book, including President Donald Trump, police brutality, and his own experiences living as a Black man in white spaces.

This interview has been edited and condensed for content and clarity.

What do you want your reader to learn from your book?

The goal in terms of its impact is to slightly broaden the definition that we all hold of what Blackness is. So many of the struggles that are depicted in the book, I think stem from a place of the people I interacted with having a pretty limited view of what Blackness is, and I’m hoping that this book will slightly broaden that view and add one more facet to what is a broad and beautiful experience.

How did it feel writing about such a personal yet polarizing topic, especially in the nation’s current political climate?

I started writing at the beginning of my junior year at Georgetown, so when it releases, it will be almost exactly four years from the time I started. So, that’s all to say, there’s not sort of one simple answer in terms of the process because it was a really long process. I also had never published anything. I’ve never written anything before this. So, I think that the first phase, which lasted probably two years, was just figuring out how to write. Learning what I sound like on the page, which took a really long time and a lot of really bad words were wasted And then in tandem with that is the process of working through one’s own history. That was at times heavy and at times difficult, but ultimately well worth it. And then there’s an added element because it’s not just a memoir, it also has other people’s stories. One portion of the process was interacting with people, not just internally, but also in dialog with other kids that grew up similarly, and that was a joy because so many of their experiences bubbled up that were similar to mine. And I think that’s where any power there is to be had in this narrative is — in the commonalities that bridge across our experiences.

Did President Donald Trump’s victory influence your writing at all?

I think that when we were at Georgetown, it was a crazy time to be a student in D.C., so a lot of current events influenced it. There’s a whole chapter on the Michael Brown protests, and on my time protesting in front of the White House when that happened. And then there’s also a chapter that was written basically in its entirety in the days after Trump was elected. And I’ve fudged with it since then, but I’ve intentionally not touched the content much because I wanted some of the rawness of that emotion to stay on the page. So, he was absolutely influential. I feel like people forget just how devastating that day was — it just seemed like the world was ending. You walked around campus and just saw grown men crying on the street. It was like a bomb went off. It was just the craziest thing. So, the short answer is absolutely — he influenced the content. There’s in fact a whole chapter dedicated to his election, which hasn’t changed a lot since it was written in November 2016.

You started writing four years ago, do you think the relevance of your book has changed throughout the years? Especially considering changes in the political and social climates.

Yes, in both positive and negative ways. On the Trump topic, I struggled with it because, on the one hand, I didn’t want to touch the chapter much. On the other hand, I felt as if there was so much new information that the book would be incomplete if it were to just go totally unaddressed. So, Michael Eric Dyson wrote the afterword to the book and that was my ask of him. I didn’t want to touch the Trump stuff because I wanted to keep it how it is. So, I asked Dyson to just keep what I had but update it. Sort of a retrospective on these four years under Trump.

I don’t think I feel any differently than I did when I started writing, but there’s been a confirmation of so many of our fears that his time in office has shown. So that’s in there, along with police brutality. There was just no way of knowing how relevant the topic would be when I started this. That is something I struggled with because the book was essentially about to go out to the press when George Floyd was murdered. And I struggled with, it because I knew I couldn’t deal with it lightly. I either have to just throw out this chapter I’ve written two days before the book is due and start over. Or, figure out some other way. So, I ultimately don’t deal with the George Floyd murder in the book. Dyson mentions it in his afterword, but that piece of it, just my discussion of police brutality, has become much even more relevant than it was four years ago.

What has it been like living abroad while the U.S. has come together for a cause you care about?

It’s been tough. I actually wrote an article about this. It was my only way of trying to wade through this stuff — just trying to process it. It’s been really tough. How do I say this? Ok, you’re living in New York right now, so, despite all the craziness that might be in the news externally about New York, that is not your everyday lived experience. Every day, when you go to the local coffee shop, it is not as bad as it sounds on the news. So, you’re able to compare reality to the headlines. I think when you live this far away, the only stuff that trickles through is just the most dire circumstances. And you don’t have a real anchoring point in reality. And the reason I say that is because it shows as a result, that it’s really hard to watch this stuff because, if you watch too much of it, you’re just convinced that your country is burning to the ground. If you watch the news, particularly after George Floyd — if you watch the news that makes it to Australia — it’s like, holy shit. I’m not going to have anything to go back to. I don’t know if I want to go back. It was also hard because I felt like I should be there. Not that I would put my cape on to fix this, but it just felt like I should be there. And then lastly, it was hard because I am in a spectacularly white place right now. Sydney, Australia is incredibly white, and there just weren’t that many people to mourn with. There were protests but it just wasn’t quite the same.

The book is inspired by your life, your life experiences, and those of others, but can you pinpoint one particular incident that pushed you to decide you’re going to write about this topic?

I started the book in a class, and I can tell you where I was sitting when the professor told us we had to write a book. I had already diagramed the first couple of chapters by the end of the class. I knew immediately — I don’t think I’d ever considered writing a book — but as soon as he said we would be required to. I knew what the topic was going to be. This is a portion of the Black experience that hadn’t been discussed and that hadn’t been done justice. And I just knew too many people with whom it resonated.

What do you think the government’s role in the fight against racial inequality could or should be, and do you see it being different if Biden wins in November versus Trump?

Yes, I do see it being different. I think that there is, particularly in the leader of our nation, a role that is policy-driven. But then there’s also a role that is arguably equally important: Setting an example for comportment. And I think that Trump fails at both or perhaps succeeds at a much more perverse motive at both. So, I think that for any misgivings one might have about Biden and Kamala not being progressive enough, they’re both just profoundly decent. Particularly Biden, he’s just decent. And I think that there’s an element of that, particularly when you look at just the recent emboldening tendencies and just animus in white supremacists. I think that taking out that fuel that Trump is constantly pumping into their animus will be important. And it will be important not just in terms of like tweets, but will be important in terms of lives saved, I think. So that’s one. On the policy side, yes. There are also differences there as well. I don’t think, as I said, that they’re quite as far down the road as I’d like in terms of a progressive agenda, particularly around prison industrial complex and policing. I think Kamala has a troubling history in policing, but commonly as of late, has really been making amends for much of that history. And really driving some of these police reforms from her seat in the Senate. And really speaking out on these issues. I’m encouraged by that. I certainly think that what I’m hearing out of them is much better than what I’m hearing from the man in the White House.