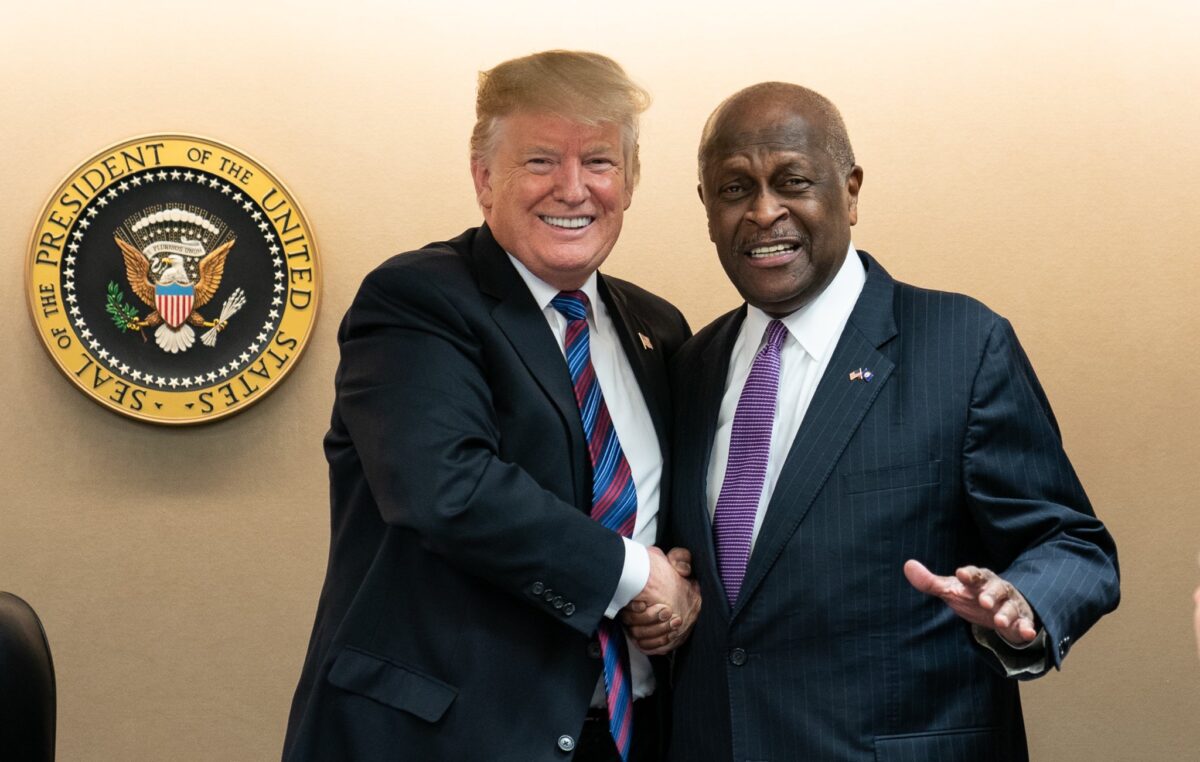 President Donald Trump finally tweeted condolences over the death of Herman Cain Thursday afternoon, over four hours after the news broke, and just minutes after the funeral service for Rep. John Lewis ended.

News broke shortly after 10:00 am ET Thursday morning that Cain had passed away after a battle with Covid-19, the news confirmed by a former Cain staffer and Cain’s own official Twitter account and website.

The former Godfather’s Pizza CEO has been an active figure in the conservative movement for the past decade, and condolences and warm memories for the man who was briefly the Republican frontrunner in the 2012 presidential race poured in. There were also a number of tweets blaming Trump for Cain’s death, citing the campaign rally Trump held in Tulsa, Oklahoma in late June. Cain attended the rally and was photographed in the audience, sitting close to a number of other supporters, none of them wearing masks.

From Trump? Silence, for over four hours.

Earlier in the day, Trump posted a flurry of tweets, complaining again about mail-in voting and calling for a possible delay in the November 3 election.

The funeral service for civil rights icon Rep. John Lewis was televised on all the major channels today, featuring moving eulogies from three former presidents, George W. Bush, Bill Clinton, and Barack Obama, all of whom earned praise for their warm words. Obama even devoted part of his speaking time to directly criticize Trump, without naming him, for his attacks on protesters and voting rights.

Trump was not in attendance, and did not attend earlier events to memorialize Lewis, including when Lewis was lying in state at the U.S. Capitol or when his casket was carried by a horse-drawn caisson across the Edmund Pettus Bridge, where Lewis was gravely injured during the March 7, 1965 “Bloody Sunday” civil rights protests.

Finally, at 2:42 pm ET, minutes after the television coverage of the Lewis funeral wrapped up, Trump posted two tweets calling Cain his “friend” and a “Powerful Voice of Freedom and all that is good,” a man with “an incredible career” who “was adored by everyone that ever met him, especially me.”

“He was a very special man, an American Patriot, and a great friend,” continued Trump.

Trump added that he had spoken with the Cain family on the phone to offer his condolences, and that he and First Lady Melania Trump “loved” Cain.

My friend Herman Cain, a Powerful Voice of Freedom and all that is good, passed away this morning. Herman had an incredible career and was adored by everyone that ever met him, especially me. He was a very special man, an American Patriot, and great friend. I just got off…

…the phone with his amazing wife Gloria, daughter, Melanie, and son Vincent to express my deepest condolences to the entire family. @FLOTUS Melania and I loved Herman Cain, a great man. Herman, Rest In Peace! pic.twitter.com/GNUf5jHjX0

Every single Trump tweet is met with strong opinionated responses, both supporting and attacking him, and the trend continued today as many of the replies to Trump’s tweet followed the tone of ones earlier in the day blaming Trump and the Tulsa rally for Cain’s death. MSNBC’s Lawrence O’Donnell even went so far as to tweet that Trump was “incapable of feeling guilt” over Cain’s death.

Trump is incapable of feeling guilt for Herman Cain dying because he attended Trump’s rally. https://t.co/I6k0Nh8H37

Herman Cain was a grown man. He made his own decision to attend a rally and not wear a mask. But Donald Trump goaded him into it every step of the way. Trump killed his “friend” Herman Cain. No doubt about it.https://t.co/BqB8HkpCb0

Herman Cain attended Trump’s rally in Oklahoma.
He then contracted Covid & died today.
Don’t listen to anti-mask people. You may not be in the vulnerable group but someone you know and love may be.https://t.co/XzkwqYzhR7

Nowhere in this tweet does it say that Cain died after getting COVID, a virus that Trump has said will “disappear.” https://t.co/ypO5Hi3YKu

Trump pays tribute to Herman Cain without mentioning that he died from Covid https://t.co/wnvQBUXNxa