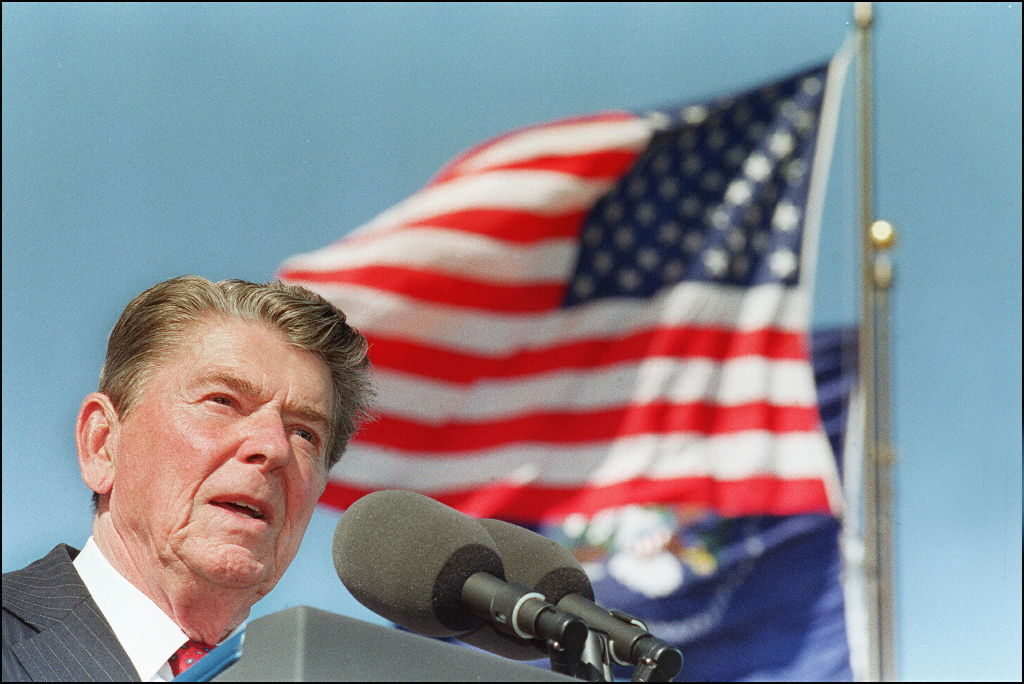 The Ronald Reagan Presidential Foundation and Institute has demanded that the Republican National Committee (RNC) and President Donald Trump‘s re-election campaign stop using former President Ronald Reagan‘s name and likeness in their fundraising communications, according to a report by Karen Tumulty of the Washington Post.

In 1987, Trump was photographed shaking hands with then-President Reagan in a receiving line at a White House event — an event described by Tumulty as “the type of fleeting contact that presidents have with thousands of people a year.”

The Trump Make America Great Again Committee, which collects contributions that jointly benefit the RNC and the Trump campaign, created a set of “gold-colored coins,” one with a photo of Trump and the other with Reagan, and packaged it with that 1987 photograph.

The set was identified as a “limited edition” Trump-Reagan Commemorative Coin Set and offered to supporters who donated $45 or more, in an email that Tumulty reported was sent out on July 19 showing “Donald J. Trump” as the sender and “Ronald Reagan and Yours Truly” as the subject line.

The email contained the typical Trump campaign puffery, saying that they “aren’t any ordinary coins,” and “symbolize an important time in our Nation” — as well as more dubious claims that the first batch had sold out, and “a very limited production of these iconic coins” was being offered only “to our top supporters.”

In the 1990s, Reagan and his wife Nancy Reagan signed legal documents granting the rights to their names, likenesses, and images to the Reagan Foundation, which runs his presidential library in California. The foundation has repeatedly sought to stop the Reagans’ images from being used for commercial or political purposes.

On Saturday, Reagan Foundation chief marketing officer Melissa Giller confirmed to Tumulty that they had reached out to the campaign to demand they stop selling the coins.

“It was simply handled with a phone call mid-last week to the RNC, and they agreed to stop,” she wrote.

The Hill reached to Giller for comment as well. “We own the likeness of President Reagan and they used his image for the coin without our consent,” she said. “We called the RNC and asked them to cease and desist the use of Pres Reagan on the coin and they agreed.”

Giller also said that the foundation was continuing to review the issue, seeking information regarding how many people received the email and how many coin sets were sold. Tumulty wrote that they “may still decide to get lawyers involved.”

While the relationship between Trump and the foundation has been “cordial,” this was not the first time they’ve clashed over how Trump sought to use Reagan to promote himself:

This isn’t the first time the 45th president has traded on the name or likeness of the 40th, who is revered among conservatives, for his own purposes. In July 2019, he shared as “Cute!” a fake quote by Reagan that was making its way around social media. According to the apocryphal story, Reagan upon meeting Trump supposedly said: “For the life of me, and I’ll never know how to explain it, when I met that young man, I felt like I was the one shaking hands with the president.”

Trump continued to spread the made-up quote, even though Joanne Drake, the chief administrative officer of the Reagan Foundation, had already told the fact-checking website PolitiFact that Reagan “did not ever say that about Donald Trump.”

RNC Communications Director Michael Ahrens confirmed that they had agreed to “stop emailing this fundraising solicitation as a courtesy,” but still noted that the foundation’s objection “came as a surprise” and they believed their use of the image “was appropriate,” given Donald Trump Jr.‘s recent appearance at a Reagan Foundation fundraiser and other common uses of the Reagan name at Republican events.

Tumulty ended her article noting Nancy Reagan’s well-known leeriness during the last years of her life of those who cited her husband’s name, no matter the cause, and insinuated that she would have opposed the Trump campaign’s coin sets:

Nancy Reagan understood that a president’s place in history is precious, unique and vulnerable to the opportunism of those who claim to follow in his footsteps. It is not hard to imagine what she would have thought of the “iconic” coins that Trump has been hawking.

Tumulty’s view found many supporters on Twitter, with many Trump critics drawing comparisons between Trump and 40th president that were unflattering to the current officeholder.

Sorry about the Reagan restraining order, @realDonaldTrump. If it’s any consolation, the Robert E. Lee Foundation will probably give you their lifetime achievement award. https://t.co/c0bxyOfmhm

Inscribed on President Reagan’s grave “ I know in my heart that man is good. That what is right will always eventually triumph and there is purpose and worth to each and every life.” Ronald and Nancy Reagan would have been appalled by Trump’s malice, stupidity and desecration’s. https://t.co/VimD9CCvYS

This is absolutely bonkers:

“When Reagan Foundation officials were made aware of the Trump email solicitation [using Reagan’s name and likeness], they decided ‘within seconds’ to put a stop to it…. and may still decide to get lawyers involved.”https://t.co/DrKx5c7iER

Donald Trump has been lying about Ronald Reagan for years. https://t.co/zZ87LrRKD0